Looking to buy electronic gadgets? To be precise, a tablet, a phablet or perhaps a mobile device for your daily use? You have reached the right place. This blog intends to educate you on how and what are the things you should keep in mind before buying these electronics online.

When somebody decides to buy a tablet or a mobile phone, the first thing they do is to ask their friends or colleagues for a recommendation. After gathering some information on a verbal note, they turn to the internet to search about these products. Internet has become like a spider web, where you will be lured with so many things and offers, that actually creates a confusing environment and you almost reach to a standstill, where you cannot really decide which device to choose.

One of the most frequently asked question is: what is better, Dual-Core processor tablet, phone or a device is loaded with Quad-core processor? Here are the simple explanation, which will clear the cloud of doubts hovering over your mind. 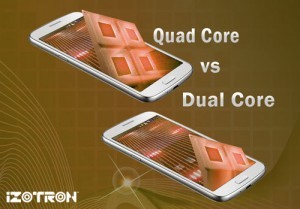 A simple thing you should keep in your mind is that “Better Cores” always gets an upper hand than “More Cores”. Simply put: It does not matter how much cores a processor has, but “how much” better core it has will decide the significance of the performance of the processor.

The common perception is that if you have 4 cores, then your task will be divided into 4 parts and if you double this up with 8 cores, it will further be divided into 8 parts and hence will provide a faster and better speed. However, in a practical picture it’s not that simple.

Various computer programs are single-threaded, which is very significant in the performances, and this simply means that the work can’t be divided across multiple CPUs. Each program will run on a single CPU. This means that just doubling the cores won’t double their performance.

For Example: If a CPU has single-threaded application running on a 2 GHz quad-core Processor, that application will run at 2 GHz and not 12 GHz. It will use one core and the other three cores will sit idle, waiting for other tasks to perform.

Writing appropriately multithreaded applications that can scale across several CPUs at once is actually a difficult problem in computer science. It’s becoming a more crucial problem, as the future brings computers with more and more cores instead of fewer cores at faster speeds.

Most apps we run in day to day use will tax maximum 1 to 2 cores in spite of any number of cores you might have in your smartphone. So, in conclusion you should always look for a better core device than the more core devices.

We at iZotron, always use the latest technology to cope up with the ever changing arena of technology. Hence, we always give you a powerful device which may be outdated on the paper, but in performance they are always superior to other devices.